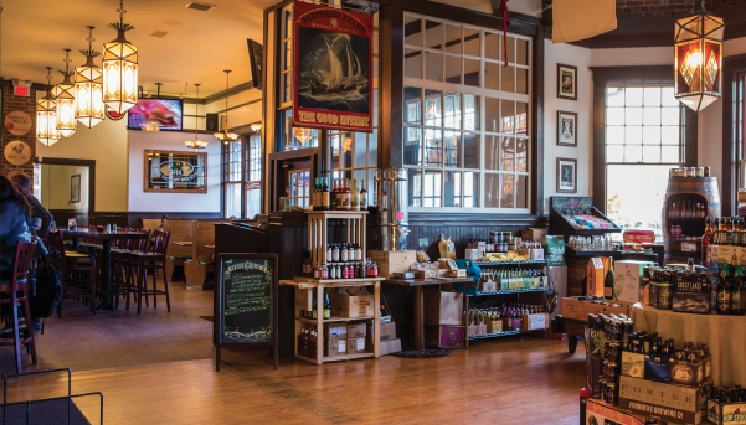 For the history lovers, this place is golden. Right across the railroad tracks from Downtown Hickory’s main square, you’ll find this treasure. The building served as Hickory’s train station for many years, and it’s this train service that allowed Hickory to prosper and to become a hub of industry. As time marched on, the station was no longer needed, and it fell into disrepair. For many years, it sat vacant, a constant reminder that industry moved elsewhere. Blight was one of Hickory’s biggest problems, and this space was one of the  more visible examples.

But Hickory is being reborn. Our abandoned mills are being turned into restaurants, venues, space for businesses and apartments. Old Hickory Brewery, a long-established business here that produces a large variety of beer and also runs the Hickory Tap Room, purchased the space and began renovations for their new concept restaurant. They included a store full of local  and internationally imported goods, from beer to cheese and many things in between. The space has been respectfully restored, with nods to it’s beginnings as a train station everywhere you look. Above the enormous selection of taps in the bar area, the mirror is painted to show the original building, with people arriving, lugg age in hand, to board the train.

Owner Jason Yates has been dedicated to creating something truly special, and we think he’s succeeded. Chef Ben Sullivan served us creative and delicious dishes, crafted from food grown and caught here in North Carolina.  When food tastes like home, it’s the best kind of food. This food reminded me of my grandma’s garden, but still surprised me with new and exciting tastes. 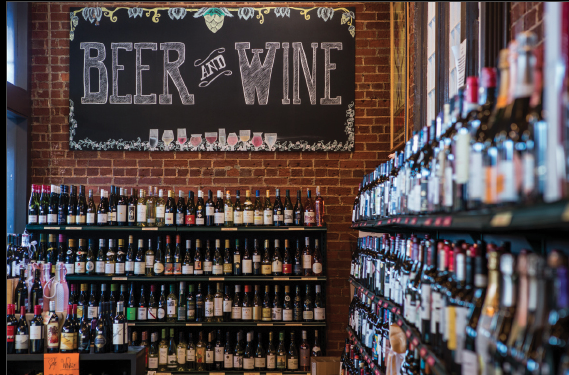 We were amazed at the beer and wine selection, both in the store and on tap. Table Rock Beer, our choice, paired well with our meal and was one of dozens we could have chosen from.  The restaurant is owned and managed by Old Hickory Brewery. Since 1994, Old Hickory Brewery has been crafting beer, predating the craft beer boom by almost two decades. In that time, they perfected their recipes, and also experimented fearlessly.

We started with sweet potato gnocchi, which is an appetizer or a side. These were sweet potato and cornmeal dumplings with a honey and brown butter sauce. Gorgonzola was sprinkled on top, and fried sage finished the dish. It was surprising, managing to somehow taste like home, even though I’d never tasted it. The crunch of the sage balanced the texture of the gnocchi quite well. It was a unique spin on comfort food.

At The Olde Hickory Station, they don’t use frozen fish. A fish monger from our state’s east coast comes every other day with fresh catches. We ate yellow tailed snapper from Beaufort Inlet, gently fried and served atop purple sweet potatoes. Green beans, still gently crispy, provided a needed crunch, and they were grown at Hoffman Heritage Farm. 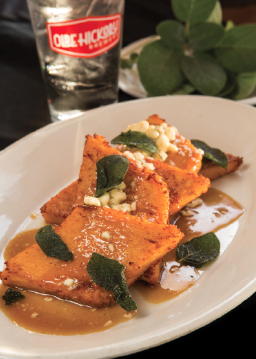 The tomato chili chutney was made in house with peppers and tomatoes from Tumbling Shoals farm. It had a pleasing heat that was not overwhelming.

We finished our meal with fresh-baked carrot cake and espresso, both made in house. When they say “from-scratch,” they really mean it. Nothing is premade for this tasty dessert, and the carrots are grown locally as well.

The espresso was richly sweet,  balanced, flavor-laden, and driven by earthy notes. Since they open at 7 am, prime coffee time, I’ll be stopping for espresso when I visit downtown Hickory.

Over-all, our experience was delightful. The service was stellar, and the atmosphere couldn’t be beat.

The Olde Hickory Station is located at: