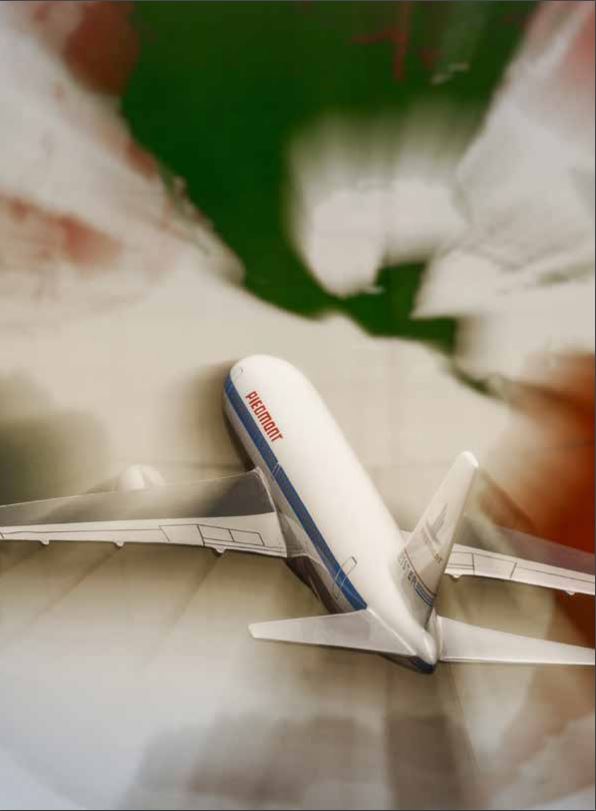 North Carolinians are a resourceful bunch. Given a problem, they solve it, with no prodding nor fanfare needed. That’s why at one time North Carolina proudly served as headquarters to the nation’s best airline. This company and its employees became famous for customer service. Passengers running late would call the terminal and find the plane waiting for them. Ever efficient, the crew usually made up the time in the air. Employees of this Tarheel aviation company refused to take a sick day because the feared missing out on workplace activities. For 40 years this airline proved how ingenious, dedicated (and friendly) North Carolinians could be. It was all just part of what it meant to “Fly Piedmont.”

Piedmont Airlines flew its first flight on a cold February morning in 1948 with a route that took passengers over the Appalachians. Founder Tom Davis envisioned an “air bridge” over the mountains that would significantly cut travel time on both sides of the divide. With a small fleet of used DC-3s, each uniquely christened with a regional “Pacemaker” name (like “Catawba Pacemaker” or “Sandhills Pacemaker”), in the early days, the company carried more mail than passengers. But as the 1950s came and went, more people began to trust Piedmont to carry them from their homes in the Carolinas to stops like Cincinnati, Ohio, and back. It wasn’t the most exotic destination, but it was a start.

In its infancy, aviation was something of a novelty; customers didn’t expect much. Piedmont passengers were served a Coke and a Krispy Kreme donut and felt privileged. As time passed, amenities grew, but efficiently. Originally, a practical CEO, Tom Davis wanted only male flight attendants because they could handle the sacks of mail that accompanied each flight. According to everyone, he scrimped on the things that didn’t matter to support the thing that did: safety. As a result, Piedmont tested the first collision-avoidance system in American aviation. “Pacemaker” planes were retrofitted with uniform instrument panels to improve pilot reaction times. During training at Piedmont, one pilot noted that their flight school “showed you how to build the plane” so pilots would have all the knowledge needed in case of emergency.

Piedmont flew into airports both big and small in pursuit of customers. In some of the smaller stops, pilots kept the engine going on the opposite side of where passengers got on and off while the crew unloaded and loaded baggage (sometimes the co-pilot helped) in a span of three minutes to help keep flights on schedule. Between Greensboro and Winston-Salem, Piedmont’s home base, planes were only in the air for 17 minutes between runways. As a local service airline Piedmont suffered nicknames like “puddle jumper” and “Pete Who?” However, the hard work of crews to make each flight a positive one began to build and with the coming of the 1960s, Piedmont’s reputation took off.

More customers meant more flights. The company could afford newer planes (they were still used) and eventually bought jets before the 1970s arrived. They even began to hire female flight attendants. Maintenance chief Eddie Culler proudly claimed he never took a sick day; his excitement for the job was so intense, he said he didn’t want to miss a thing. He watched an airline build a stellar reputation. His coworkers reflected this attitude; ticket agents, flight crew, cleaners, mechanics, and just about everyone, saw Piedmont Airlines as much more than only a job. One pilot revealed a common joke around the company when he asked, “How’d you spend the holidays, with your loved ones? Or your family?”

When deregulation arrived in the late 1970s, management, including Mr. Davis, feared they would lose their customers, but the “can do” attitude of his employees caused him to look at the aviation business differently, helping him realize that Piedmont could compete with any other airline. And they did. Prudently, they took on new routes. When those filled, they added others. By the early 1980s, Piedmont flew non-stop to the west coast. But in doing so, the company displayed an ethic not often seen in business. On that first flight to Los Angeles Captain Bill Kyle was aware he would have to stop for fuel. At that point, the company didn’t have their extended range jets. Upon arrival to LA, he apologized for the delay, which was only a few minutes and directed passengers to look in the pocket in front of them. The company gave each person a $100 bill for not living up to the ‘non-stop’ promise. As Captain Kyle thanked departing passengers one guy said he’d fly Piedmont all the time if they kept that up. 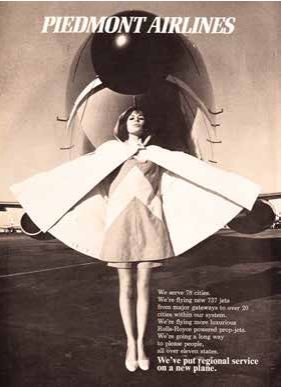 By 1984, Piedmont flew high. That year the company received the prestigious national award, “Airline of the Year.” Mr. Davis remained modest in Piedmont’s achievements, noting he was like the turtle on the fencepost. He didn’t get there by himself. But Tom Davis created a culture unlike any other in American business. He knew his employees by name, even when the company employed thousands. He took care of them, and they loved him for it. When he retired, they all chipped in and bought him a new Piedmont-blue Mercedes Benz.

It wasn’t easy managing such a high spirited group. One of the legendary pilots reportedly gambled away his plane during a poker game on a layover. That same pilot, supposedly, flew his “Pacemaker” naked (although he claimed he didn’t because he was wearing his captain’s hat). But for every antic (and there were lots of them), there was a maintenance man back in Winston Salem whose job it was to clean the “honey pot” (plane toilets) between flights. Caught complaining one day, a co-worker suggested he quit. The man shot back, “And leave Piedmont? NO.”

The 1980s were triumphant days for the little airline that had now grown into the 9th largest in the United States. The tagline to their commercials proclaimed them, “The Up and Coming Airline.” They flew to London, planned a transportation empire that including trucking, railroads, absorbing other airlines. The sky was the limit for the company. Hubs had been established in Charlotte, Baltimore, Dayton, Ohio. Profits soared. But soon, the “Pacemakers” came in for an abrupt landing.

The death of Piedmont Airlines came in a merger that many saw as a buyout. USAir paid the highest price ever up to that time for another company, claiming it were going to blend the “cool northern efficiency” of their company with the “warm southern hospitality” of Piedmont. The union didn’t work out. Eventually, the Piedmont logo, the “Speedbird,” vanished, replaced by what folks from the old company jokingly called “UselessAir.”

2019 marks the 30th anniversary of the last flight of a Piedmont plane from the original company. But those that were part of the Piedmont tradition cherish their time doing the work they loved. One stewardess (as women flight attendants were called in those days) said that USAir passengers would ask her regularly if she came from Piedmont. They recognized spirit of Piedmont. It shone through her. After USAir had gone through its second bankruptcy, letters to the Charlotte Observer begged for the return of Piedmont, a decade after its demise.

Many employees offered to follow Mr. Davis to a new aviation company if he only would, their faith in him so strong. It was not to be. Forty years went rather quickly for those who started with Mr. Davis at the beginning as well as those who joined along the way. But the reputation of the “Speedbird” left its mark. These North Carolinians, their hard work, their care, their enterprise, created a company that now retains the stuff of legend, a mythical airline that once flew our skies.

Richard Eller is the creator of two works on Piedmont Airlines. His book, “Piedmont Airlines: A Complete History” is published by McFarland and Company, Publishers He also produced and directed a documentary, called “Speedbird: the History of Piedmont Airlines” which has aired regularly on UNC-Television. The DVD is available at www.bookstore.cvcc.com