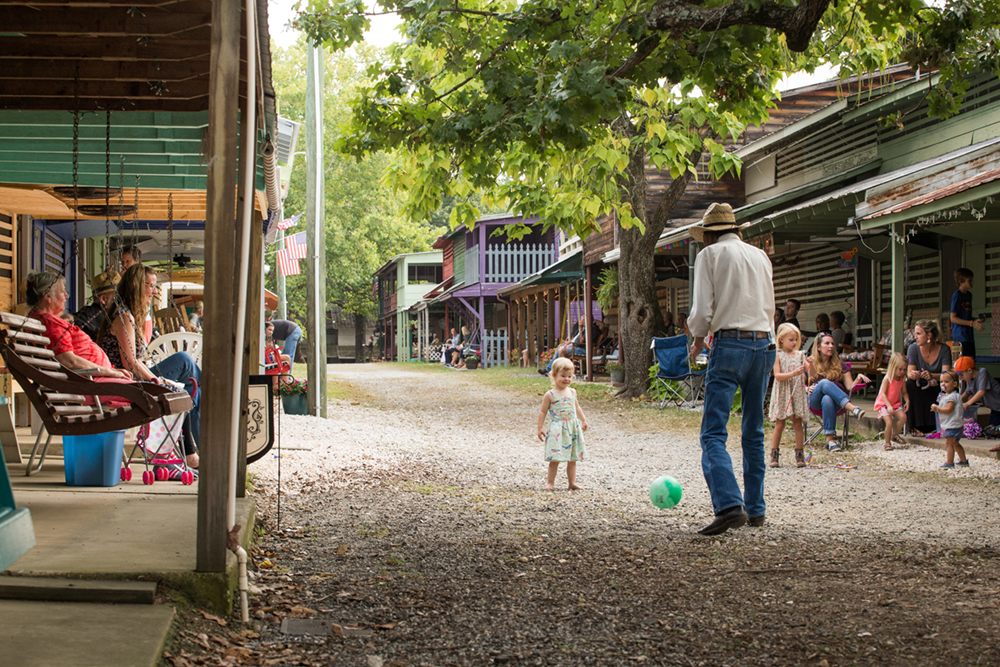 An Endangered American Tradition Thrives in the Foothills of North Carolina

Camp meetings used to thrive across the United States. In a time where transportation was difficult and life was hard, people all over the nation would gather together once a year for an outdoor revival. Without cars, the journeys to these revivals would take quite some time, and it became practical to set up “tents,” which allowed people to stay for longer times, typically a week or two. These meetings came to be known as “Camp Meetings” and they were popular in most states. In the 1800s, these meetings were vitally important. With so much distance separating people, it was difficult to find good mates. These meetings became a dating pool of sorts, as they were the best time to meet good Christian people who weren’t your neighbors. They also served the purpose of a community anchor-bringing people together with shared experiences. 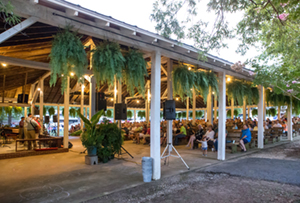 Camp meetings fostered a love and appreciation of music; hymns  were memorized and sung by all, but with a certain spontaneity that’s hard to find elsewhere.

“Specialists in nineteenth-century American religious history describe camp meeting music as the creative product of participants who, when seized by the spirit of a particular sermon or prayer, would take lines from a preacher’s text as a point of departure for a short, simple melody. The melody was either borrowed from a preexisting tune or made up on the spot. The line would be sung repeatedly, changing slightly each time, and shaped gradually into a stanza that could be learned easily by others and memorized quickly”

American Camp Meetings were so ubiquitous that they are even mentioned in the classic The Adventures of Tom Sawyer. But, as time marched on, these camp meetings faded. In most areas, the tradition was forgotten, and the campgrounds fell to ruins, or burned down.  In fact, in 2017, only a handful of these places still remain, and the large majority are right here in the foothills.

Balls Creek Campground, pictured on these pages, is the largest camp meeting that survives today. 350 “tents” are situated in two rows around a center meeting space.  The tents look like shacks, but stand the test of time. Most don’t have running water. Some don’t have electricity. But they do have porches, and that seems to be the most important part of each tent. Nearly every one of the 350 tents have people swinging on the front porch, and people “walk the circle,” which is actually a square, to socialize.

Attending Balls Creek when Camp Meeting is in session feels almost zen. It feels like a mix between a family reunion and a high school reunion. The key word here is reunion-most of the people here have been coming their whole lives. They look forward to the two weeks they spend each year with their neighbors. The word “community” very much applies, and the relationships forged here form an invisible but supportive webbing that lies underneath everything locals do.

Una Mae, shown in red at right, has attended Balls Creek Campground for 2 weeks of each of her many years. She remembers riding horse-drawn carriages and the sense of excitement she felt when they arrived.  Her tent has been in her family her whole life, although like many campground tents, it did burn down. The family rebuilt it, better than it was before, and on camp meeting nights it is filled to the brim with happy family members sharing food, laughs, and stories.

So why have our camp meetings survived when they didn’t elsewhere?  A popular theory insists that it’s because our lifestyles are still more agriculturally based than most places. Here, harvest time still matters, as does the needed break afterwards.  It’s also possible that our slower lifestyles have allowed space for this tradition to still exist, where most places have gone the way of fast food, interstates and Wal-marts. We still have those things, but they don’t seem to matter as much here, and they don’t seem to hold the importance they do in other places. 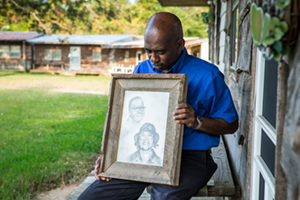 Balls Creek isn’t the only camp ground in our region. In fact, there are several that are still quite active. These campgrounds are quite segregated, entirely, in fact. One doesn’t get the impression that a person from other races wouldn’t be welcome. They would. Before the signing of the Emancipation Proclamation, Rock Springs was the largest of the meetings and whites and blacks both attended. Once signed in 1863, the meetings split, and now we have several.

Rock Springs Campground is near Denver. In 1794, this group began meeting annually, and people came from all over the state. They moved to their current location in  1830. This site has 260 dirt floor “tents.” The first tent built on the site, called “Number One,” is still occupied by the original family, and is passed on generation to generation.  The original arbor is still standing, and is still used for church services.

BalSome of the original rules included: “No person shall disturb or violate the public worship in any shape or form, or shall appear drunk within the said 45 acres”, the penalty if convicted was a fine of $5.00. and “A black person, slave or free, shall (not) be found with liquor in his possession or be drunk”, the penalty if convicted was to receive “39 lashes on the bare back”. It’s easy to understand why the camp meetings segregated when you see the difference in punishments.  It is interesting to note that the rules against alcohol continue today at most of these sites.

The black campgrounds are more numerous, and tend to be smaller, but are well-attended and anchors of their communities.

McKenzie’s Grove Campground was established in 1876 and is home to 20 tents. At some point in time, a road was built through the center of the campground, which hasn’t discouraged the people that attend the meetings. A wall was added to the arbor to block the sound, but otherwise, the grounds remain unchanged by time.

The largest black camp meeting by far is Tucker’s Grove. Located near Iron Station, seven acres was purchased by William Tucker in 1878. With over 100 tents, this meeting is quite large. The property was originally a white campground,  so many of the structures existed. The original arbor still stands and it’s constructed with a traditional tongue, groove and peg system.

Mott’s Grove Campground has 30 tents around an arbor in Sherrill’s Ford. It is named after Dr. John J Mott, who happened upon a group of African Americans worshiping together in the woods. After the Civil War, Dr. Mott gave the land to the black community. Dr. Mott eventually led the Republican party in NC. The campground was officially established in 1872.

Abraham Lowrance McCombs was the grandfather of Jerry McCombs, shown left. Jerry remembers his grandfather being an excellent leader. He fondly recalls his grandfather walking the perimeter of the grounds, telling everyone he saw that it was time for the service. He was very strict with the children-if they weren’t going to attend the service, they must be quiet inside the tents. They listened obediently, and anytime any trouble arose, Abraham called the Sheriff with whom he had an excellent relationship. The Sheriff trusted Abraham’s word, and his ability to keep things moving smoothly.

There are a handful of these camp meetings outside of North Carolina. One at Martha’s Vineyard is wildly popular. It’s also important to note that Pentecostals and Wesleyan still hold camp meetings each year as well, but they are modern affairs,   without tents, arbors or palpable history.

The Foothills of North Carolina are a special place, as everyone who lives here knows. We cherish our history, and we want to preserve it for our children, and their children. This tradition doesn’t seem to be endangered here at all. Here the tradition flourishes. 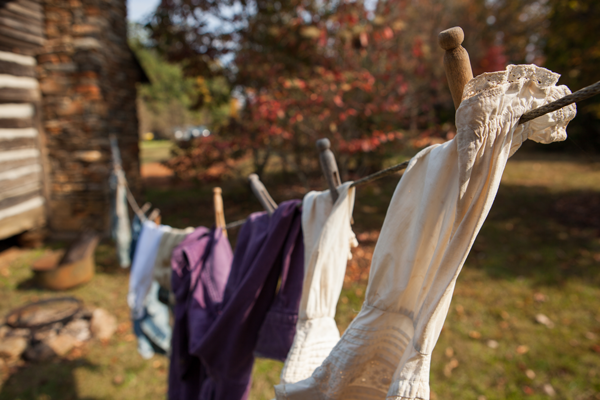 The beginnings were modest, as beginnings often are. In the early 1970s, Dr. Hart began purchasing land in Catawba County with the intent to create a nature reserve. His love of history, however, proved to be stronger than he knew, and he began purchasing, preserving, and restoring old cabins. What evolved is quite like a living museum, and for one day a year, the experience is immersive. 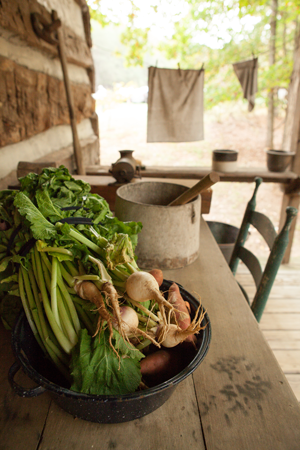 “The focus here is on showcasing the artistry of the 1800s,” says Dr. Hart, and each October, 350 artisans gather at Hart Square Village to demonstrate what day to day life was like in our region during Colonial times. 3,500 people interact with these artisans and gain a better understanding of local history. It’s truly something everyone should experience. Basket weaving, molasses making, cotton-pressing, tin-making, and so many other demonstrations are quite educational, and the buildings are each stocked full, looking as if the owner just stepped outside.

Dr. Hart’s passion was building this treasure, but his granddaughter Rebecca’s passion is sharing it. And it turns out, she’s quite good at it.

Rebeca Hart grew up here. She played in these houses the way most little girls play school on their back porches. For her, history was alive, palpable, and very important. She can tell you more than you’d ever want to know about the buildings here, and the history they hold. She seems as permanent here as the towering trees and the ponds her grandfather carved into the hills. 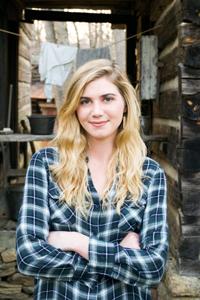 Rebecca is now the Executive Director at Hart Square Village, and under her leadership, the venture has thrived.

She is focused on sharing and preserving the artifacts here, and has better situated the group for success by reorganizing as a nonprofit organization.

She has also created an extensive educational program that hosted 2,000 students this year. 8,000 are slated to attend in 2018, marking truly spectacular growth.

The growth can be attributed to the popularity of the trips. The kids love them! The activities vary but recent classes have included “Corn Husk Angels and the History of Corn in the South” and “Banjo Making and the History of Appalachian Instruments.” Native American story telling and blacksmithing are both popular field trip activities.  Hands on activities and lots of fresh air and exploration always make for an exciting trip, and Hart Square Village offers both.

Rebecca is always looking for new ways to connect history to the present, and she’s found a pretty exciting way. 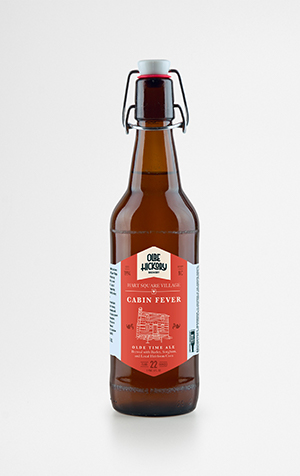 Drawing on the immense popularity of craft beer, Hart Square Village has entered a partnership with the Old Hickory Brewery.  They have crafted a historical beer. Cabin Fever Olde Time Ale is both delicious and historically accurate. It’s created only with ingredients that were readily available to our ancestors, using methods they had access to. All of the ingredients were grown on site, and even the grist mill was used. An old fashioned sorghum molasses is the finishing touch. An authentic beer may be the one thing the festival has been missing.

After the festival, Hart Square Village is partnering with Highland Avenue Restaurant, which is housed in the renovated Hollar Mill, to bring an exciting dinner to the region. Highland Avenue is a farm to table restaurant, which is a very historical concept. Together, the two groups will be serving an authentic historical meal, served Pioneer style. This is the only event of it’s kind, and it dovetails so nicely with the intent of both groups. The historically accurate Fall dinner adds one more way the Hart Square Village is bringing history to all of our senses. 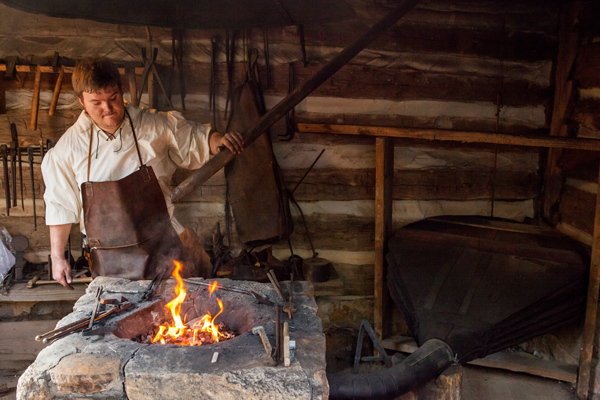