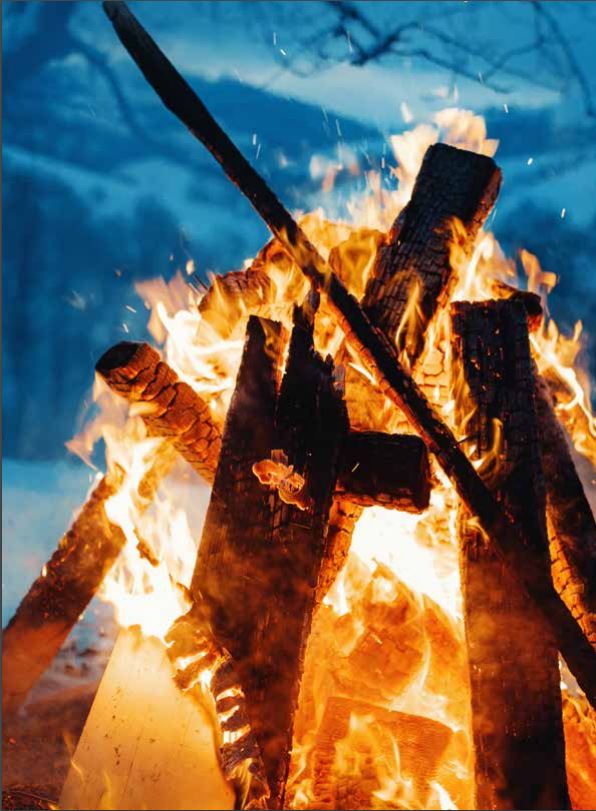 At a Cracker Barrel or local breakfast joint in Anytown USA, there sits a table of old timers, mostly comprised of the recently and notso-recently retired. As soon as the weather starts to chill, this team of experience-taught meteorologists will start calling for an OldTime Winter, like the days of yore where the snow was “twice as high, the temperature was twice as low, and lasted twice as long.” Most of us brush off these tales as exaggerated stories or tall tales. However, it turns out Old-Time Winters were much colder than those we experience. The truth of the matter is that the winters of our ancestors were absolutely more brutal than what we face today. Imagine sitting in a cabin on the frontier while leafless tree limbs reach like skeletal fingers towards the sky…being alone with your family on a ridge while 40-mile an-hour howling winds beat across your home. Winter, for most of human history, has not been a Thomas Kinkade painting.

It was a time to be feared. Winter was the time when all of your shortcomings during preparation and harvests were exposed. Using tried and true practices and folk beliefs our ancestors made sure their bodies and minds made it safely through the darkest season of the year. From the time of the first settlements in the New World, up through the days of Revolutionary War, the Earth was experiencing a miniature Ice Age. Winters were much longer and much colder than the ones we experience today. The Continental Army’s winter at Valley Forge was far worse than we can imagine. It is important to remember that the settlers of the Foothills and Mountains of Western North Carolina were mostly of European descent, including English, Scottish, Irish, and Germans residents. All of these areas also had very harsh winter climates, which provided the settlers with a good baseline of knowledge. They combined this knowledge with the teachings of Native Americans to create the winter traditions we know today. But before we talk about traditions we need to look at the practical steps that were taken to survive the winter. Wool would have been the fabric of choice for Europeans and Natives alike by the mid 18th Century. Wool blankets were one of the most hot ticket trade items on the frontier. Today we consider wool to be a scratchy material that makes ugly Christmas sweaters, but wool has an incredible warming property. Wool, spun from the shorn hair of sheep, will keep you warm even when wet and it also dries from the inside out. This helps your body and under layers dry out far faster when the outer layer is whool than when it’s leather or cotton. This was an incredibly important technology because waterproof materials were hard to come by. In the 18th Century, homes in the region were designed solely around heat management. Low ceilings, no windows, and a massive fireplace were staples for winter survival. Many small cabins also had doors mirrored on each side of the cabin. In the summer months, they served as a breezeway; in the winter it helped to move the live stock in and out of the house. Many farmers and frontier people slept with their animals in the home for additional heat and to protect the animals from the harsh elements. In the winter the fresh foods of the summer were gone and most of the meals they ate were stews made from rehydrated, dried, and salted ingredients. Coupled with the fact that the days were very short and the nights seemingly unending, its clear that winter was a dark time. The hearty settlers and Native Americans turned to social activities to pass the long months.

Storytelling is perhaps the most universal commonality between the winter traditions of Native Americans and colonists. Both groups would spend hours in taverns, homes or long houses by the fire. Because of the isolation that both the winter and rugged life forced on these people, this time of year was a prime season for gatherings. Imagine the joy that gathering by a tavern’s fireplace must have brought early European settlers. The stories of the Native Americans consisted of creation myths and fables while European stories focused on biblical themes, ghost stories, hunting tales, and of course Christmas traditions.

Christmas was a special time of the year for settlers, but is much different that the holiday we know today. The celebration stretched over 3 separate months from Nativity of Jesus on December 25th until the Purification of the Virgin on February 2nd. Throughout this time there were many celebrations including Holy Innocents Day, Saint Stephen’s Day, Saint John the Evangelist’s Day and the Feast of the Circumcision (oddly enough there seems to be two separate days to celebrate the Circumcision of Christ). During this time there were family and community meals, singing, dancing, and decorating. The celebration of Christmas in the southern colonies is much more common than in puritan New England. In fact, the holiday was outlawed in many northern colonies.

Conversely, areas with Germanic populations had even more wild Christmas traditions, like Krampus the Christmas Devil who would kidnap bad children to punish them. The importance, in our neck of the woods, was placed on fellowship with friends and family, instead of on gift giving. Winter in a historical context is a fascinating subject. Today lights, electric and gas heaters, insulated and fast transportation, and various entertainment technologies have greatly changed the way we spend the season. Beneath it all we are still a society that suffers from seasonal depression and longs for connection during this dark time of the year.

In many ways we aren’t that different than the first settlers who huddled by the fire with their families telling stories to pass the time on cold winter nights.