Newton: Then and Now 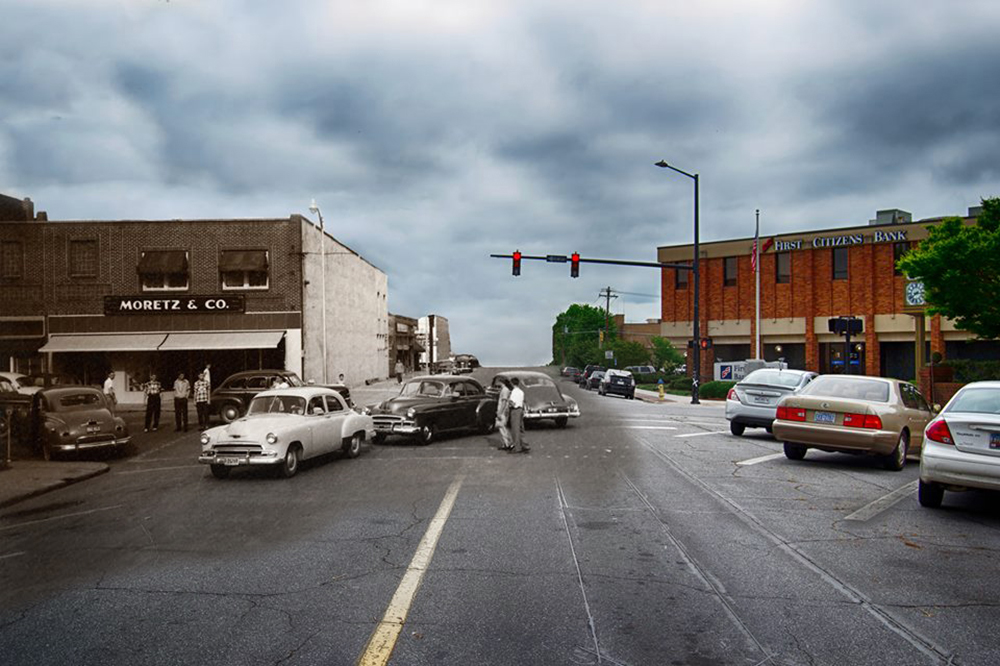 Main roads won’t take you to Newton anymore. Interstates and bypasses, heralding a faster paced life, have long sidestepped one of the Foothills’ most picturesque towns. But a new study of Newton promises insights to a small town unseen when see driving by. Newton: Then and Now digs into the town’s appeal by seeing its past in its present.

For those of us unable to travel back in time, this new work combines seasoned experience with fresh eyes. Catawba Valley Community College photography students, under the direction of instructor Clayton Joe Young, combed through a myriad of historic photos provided by the Historical Association of Catawba County to select images that could be “re-photographed” from the same angle as originally shot, demonstrating the ways in which the city has changed. The results are striking.

From the dirt streets of early 20th century to the fads of the 1970s, Newton has weathered change gracefully. The results of the renewed look show a landscape adjusting to new challenges, new lifestyles, new priorities but never at the expense of its past. Side by side, the images offer a perspective reminiscent of a family album, where, in an instant, kids grow up before our very eyes. On a few occasions the two are blended as students endeavor to meld past and present into one scene, the traffic jam of 1952 placed on the street today.

To give another perspective on what it means to walk the streets of downtown Newton and know the surrounding events of the past, Newton: Then and Now includes commentary from the town’s most seasoned reporter. Sylvia Kidd Ray wrote her first article on what she saw as important about Newton (her kitty cat) at age 7 and over 70 years later, she still observes her beloved community in a weekly column in Newton’s Observer-News-Enterprise. Her family’s business in the news of Catawba County goes back to the 19th century. She recalls crossing the streets of the downtown area at age four, “they taught me,” she said, as she ventured down to the City Pharmacy for a “slumgullion,” the unique soda concoction only to be found in Newton.

Sylvia’s remembrances give voice to the images of Newton from past days, some from her own recollection, some passed down to her by earlier generations. When she went to get her groceries at Honey’s Supermarket, friends would teasingly ask if the street in front was the site of the 1865 shooting of a Confederate officer by a band of Union cavalry, many having heard Sylvia tell the story in public settings. “You know it is,” she always replies.

Every building has a story and Sylvia Kidd Ray has probably reported on them at one time or another. To say that the events that, at one time or another, occurred in Newton are unique is an understatement. One prominent family, Sylvia recalls, packed up their house in town when a member of the family got a federal government job in Washington, DC, only to return every Soldiers Reunion to open up the house on North Main Avenue, walk to the courthouse on The Square, and receive friends and acquaintances in the main courtroom. “They held court like the queen of England would do,” she says, still astonished.

Newton came into being as the county seat for the newly created county of Catawba, which seceded from Lincoln County in 1842. It is historically believed that the name came from state legislator Nathaniel Wilson’s new baby who was born about the time the General Assembly passed the bill creating the new county. That baby was Newton Wilson, named for an officer in the guerrilla warriors of the Southerners’ favorite Revolutionary War hero, Francis Marion, the legendary South Carolina Swamp Fox. By 1850, 84 residents lived there including the most prosperous man in Catawba County. By comparison, and at last count, over 13,000 call Newton home. In 1884, a cyclone ran through the town. The center of town has hosted several courthouse buildings, including the one built in 1924 that is now the home for the Historical Association of Catawba County. Republican presidential candidate Robert Taft gave a speech on the courthouse steps.

Newton has always been the patriotic Center of Catawba County, as evidenced every third Thursday in August for the past 128 years. Soldiers Reunion remains the oldest non-holiday patriotic parade in the United States. Internationally noted singers, national leaders and even a Cold War spy have all come from Newton.

The experiences of a town often fade with time as one generation fails to carry on the family history. Capturing those occasions, in visual and remembered moments, helps everyone who comes along later to see the community for its true value. A visit to Newton, a walk along The Square in downtown, maybe a stop at one of the restaurants or specialty shops downtown and a look at Newton: Then and Now instantly gives one a deeper feel for the character of a town that has much to convey, from its big events to small.

Newton: Then and Now will be available early next year from Redhawk Publications, a Catawba Valley Community College initiative, just in time for a visit when the weather turns warm again. Get a copy when visiting the History Museum, on The Square at the 1924 courthouse, in Newton, of course.

By Richard Eller
Photography provided by the Historical Association of Catawba County and Jake Mikeal.