Looping in the Foothills

There is evidence as far back as 1874 that there were looping machines being used in North Carolina to knit together the top and back flap of sock toes. This made a very smooth-fitting sock, as opposed to other methods which sewed the sections together, leaving a raised seam that irritated toes.

This looping machine was invented during Germany’s industrial revolution. It was an electric machine which housed a large circular dial filled with pin-sharp needles. Following a faint line in the sock, the operator would insert certain knitted stitches onto this dial; first the back, turn the corner, then the top. The dial was fitted with a sewing needle that sewed between the needles. At the end of the circular dial there was a blade that cut the leftover threads, thus separating the socks. The dial continuously moves while the operator installs the socks in this fashion, one after the other. If she is efficient enough, she never stops the dial. It continues for hours and hours and is very boring work. 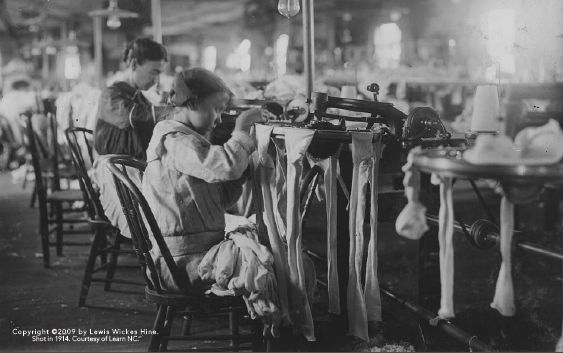 Early in the history of hosiery in North Carolina, children were used for this work for obvious reasons After all, they had already been performing much harder work on the farm and in the kitchen, and now they were able to contribute to the family income. In 1900, 18% of American workers were under the age of 16.

But this began to change around 1916 with the child labor laws of the progressive reform. However, the Supreme Court declared this change unconstitutional. Then, Congress passed an amendment authorizing federal child labor legislation in 1924, followed by the Fair Labor Standards Act of 1938, which set minimum wage and maximum hours. This, along with the world wars, market crash, Great Depression, and record unemployment, paved the way for more adult women to enter the workforce.

In 1941, my mom learned to loop at a looping school off of Highway 127 in the Viewmont area of Hickory. There were many of these home-industry schools located in private homes throughout the South. When she finished the school, she was employed in one of the local mills. Mom’s looper was a 22-guage, which demanded more respect because the needles were tiny and extremely close together. She prided herself on her efficiency.

Our family was blessed with electricity in 1950. About this time, my older sister returned home from the polio hospital and my baby brother was born. With 5 children, a farmer husband, and a handicapped child, Mom began to realize she needed to make a change and start looping at home. This enabled her to take care of the kids, run the household, receive an above-average wage, and have flexible working hours.

Being home meant that we could spend our summers playing and performing chores. I’m sure we did not realize it then, but it was a blessing to have our Mom home for breakfast during the school year and still have her home when we got off the bus in the afternoon.