Six Miles Outside of Hickory

I find myself at a standstill outside two swinging metal gates.  Its calm, quiet, and cold. Its sunrise on a fall morning, and on the surface, the landscape looks eerie and uninhabited. However, looking around, my sense of wonderment and curiosity can’t help but take over. I fall deep into a feeling of serenity and lose myself in the sensations provided by the juxtaposition of decaying man-made history and the overpowering force of Mother Nature.

Before I know it, the landscape starts to speak. I start to hear the vehicles speeding up and down the road bisecting the property as they take a hard turn north and lay on the gas to make it up the hill. At the same time, I tune into a tractor firing up across the Henry Fork River as its engine echoes along the river bank. Then, the chord is completed by the howling sounds of chainsaws in the distance. The typically unpleasant sounds of the city become fresh to my ears as they play into the perfect man-made ambiance. Then suddenly, silence sweeps back over the entire landscape. Only for a second, the sounds go lifeless and time starts again. 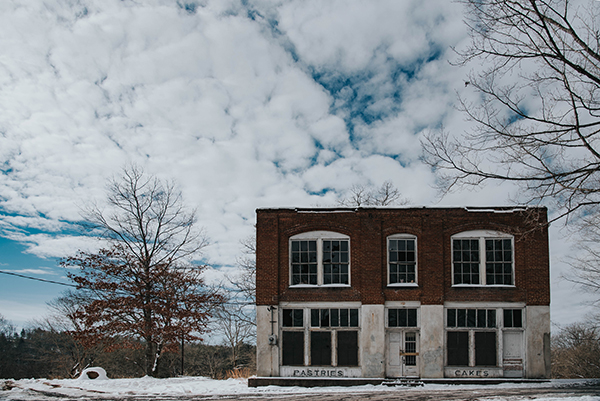 I walk up to the metal gate blocking the road, unlock the royal blue coated lock and let the heavy-duty metal chain fall down against the metal gate. The metal on metal clang acts as a trigger, like a shot of espresso, or a Pavlovian response of sorts that signifies the start of a fresh day of hard work. I drive through the gates and lose myself to the mercy of the roaring sounds of the Henry Fork River and the voices of the Mill Hill, its people, its history, and its future.

This is my Henry River Mill Village experience. Mine is a unique one in that my family and I recently purchased the Village last October. However, it’s far from the most significant experience in the history of the Mill Hill.  While we have been welcomed with open arms into the Henry River family over these last few months, we are humbled knowing that our ties to the Village are minute in comparison to Henry River’s vast historical impact on our culture and our community.

Our personal journey with Henry River is primarily focused on preservation and adaptive reuse.  The Mill Hill was once bustling with activity, hard-work, and life. While the Village has more recently become known for possible paranormal activity, or better yet, as District 12 from the Hunger Games series, the real lives and their stories still reside within the walls of the remaining structures. Our goal is to bring those stories back to life and allow the public to enjoy the beauty, serenity, and history of their own Henry River journey. 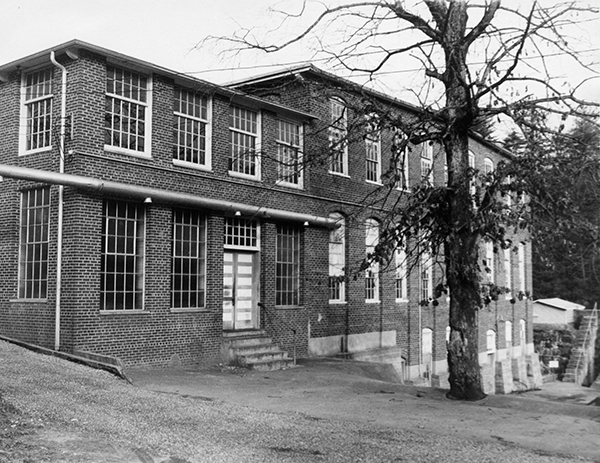 While the area was known for its water-power as early as 1860, the most relevant historical impact came from the purchase and development of the land in the early 1900’s. The Aderholdt and Rudisill families partnered to establish the Henry River Manufacturing Company, which was a cotton yarn manufacturer that opened it’s doors in 1905. During its initial operation, the Company erected 35 worker houses, a two-story boarding house, a bridge, a brick company store, a power producing dam, and the original 3 story brick mill building where the yarn was produced.   Until 1914, all operations were fully powered by water-power. This was later converted to steam power and electricity as technology advanced and upgrades were made to increase production.  By 1963, the Company had tripled its initial production from 1905, but due to economic pressure from overseas, the textile industry had already begun a hard downward spiral. 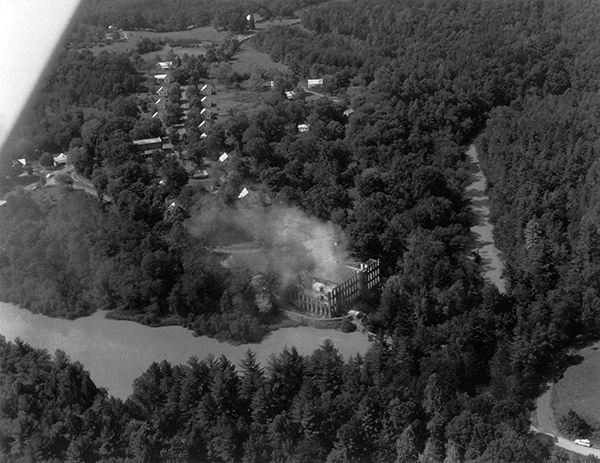 In 1977, just after Wade R. Sheppard purchased the property, the main mill building burned to the ground after a believed lightning strike.  At the time, this may have appeared to be a coup de grâce for the Mill Hill, but the community still prevailed. In fact, many former residents of the Village recollect the last native moving out of the Village in the late 90’s or early 2000’s. That’s sometimes difficult to comprehend, since the village still has no running water, and no sewer system. To put it in another perspective, while I was learning to use my graphing calculator in geometry class, people at Henry River were still using outhouses in the dead of winter. This is an example history that seems so distant, yet it can still be seen, touched and heard with our own eyes and ears as witnesses.

While the same stories can vary in detail from one Village resident to another, one theme seems to stay intact: community. Throughout the entire history of the Henry River Mill Village, there is story after story, example after example, of Village residents coming together in a time of need to help one another.  Henry River was more than a group of workers that happened to live in the same neighborhood, raising their families, and minding their own business. Instead, Henry River became a large family, better yet, a Village network, that valued the

It Takes A Village… 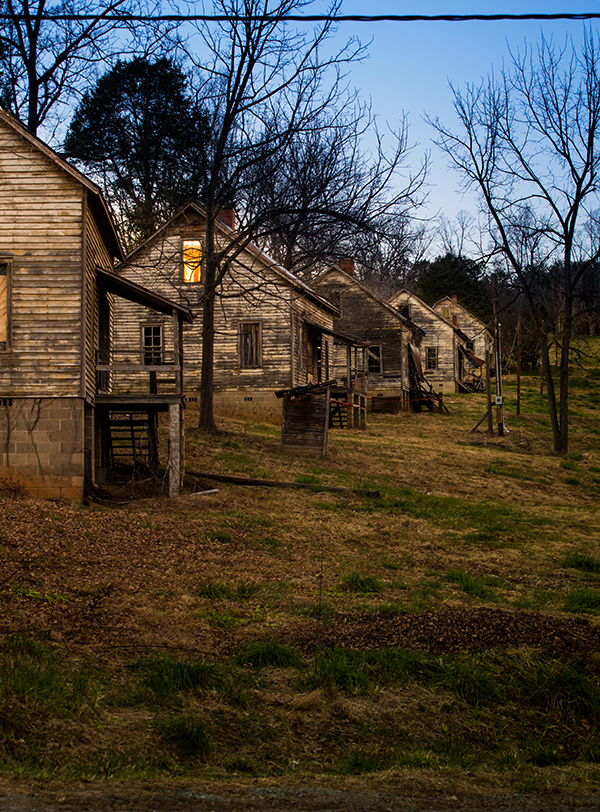 My family comes from a long history in the restaurant business. All of my earliest memories are surrounding food, and if my memory serves me right, I loved food so much growing up that my step-brother used to refer to me as the family garbage disposal. All joking aside, food is something that brings people all over the world together. It acts as its own universal language, and a meal prepared from the heart can express emotion, and can even take you back in time. That’s exactly what Anita Rudisill Brittain did when she offered to make her Black Walnut Pound Cake straight out of Henry River.

When Anita brought up the idea of making her Black Walnut Pound Cake, I didn’t realize that she intended to harvest her black walnuts directly from our trees at Henry River. As a city boy, this is something that seemed archaic, but I was fascinated by the idea of knowing how to harvest and use the large green and black fruits that always stood out more as ankle busters than as food.  Of course, black walnuts are readily available at grocery stores, but this exercise was more than learning how to harvest and use an ingredient. Instead, it was a history lesson about community, culture and my favorite topic of all, food. With every crack of the hammer, Anita outlined the tedious step by step process of harvesting the meat from the black walnuts. With every crack of the hammer, Anita took us back in time to her childhood and to the way life was in the Village.  We were riding in a modern day time machine. 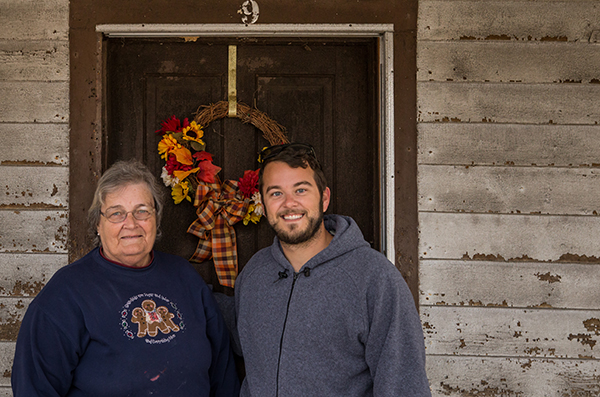 Anita is a special part of the Henry River family, and she comes from a long line of Henry River natives.  There is not a photograph, news article, or activity that goes on in Henry River without her being a part of it. History is more than acknowledging major events in time. Its also about taking the time to understand the lifestyle, emotions, and thoughts that helped sculpt the culture we have today. Since we’ve embarked on this project, Anita, as well as all of our other amazing volunteers, has been an indispensable asset and a wealth of information on what life was like growing up at Henry River.

Photography has been provided by Jon Eckard, Jeff Wilhelm, Kelsey Crowe and from historical archives.