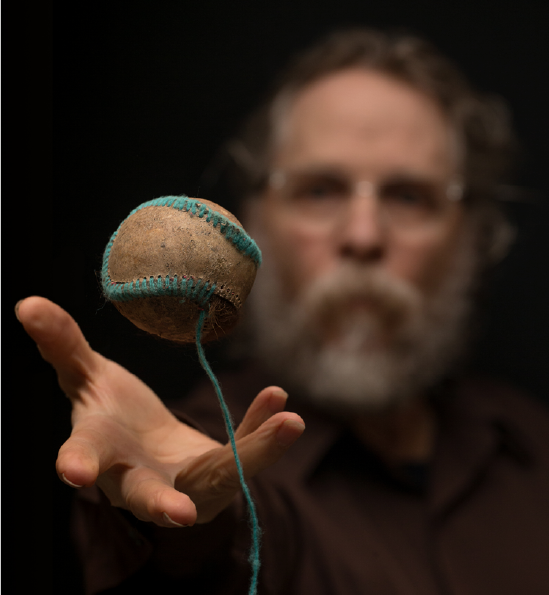 “Recovery of the Ball.” The ball is a symbol for life, and “recovering it,” as well as understanding it, is a driving goal for Dan Smith. Here, he is tossing a ball he made by hand of buffalo hair and other natural materials. His art, heavy on personal symbolism leaves us asking questions, and wanting to know more.

Dan Smith is an artist, in the same way Van Gogh was an artist, which is to say down-deep in his soul. He is prolific, with his ideas running faster than his hands can keep up.

He is driven, consumed even, by the story he is trying to tell, and as we listen to him talk, we realize he’s been telling some of the same stories since 1989 when he began developing his Master’s thesis: ManLandSee.

We couldn’t understand the whole of his story in the limited time we had, but we were fascinated by what we grasped.

The art he told us about circles around and around a set of themes. Native American culture seems to plays into every thing he does. Smith is fascinated by the directive to “ recover the ball,” made by the Oglala Sioux Spiritual Leader Black Elk shortly before his death in 1950, recorded in Joseph Epes Brown’s book “The Sacred Pipe”. The number 12 recurs, with an animal representing each month including buffaloes, deer, salmon and horses, among others. The number 7, Mickey Mantle’s number, also recurs quite often.

His work examines the cyclical nature of life, the symbolism of the baseball and ecology. In fact, he says ecology is the very basis for all he does.

Dan’s Native American heritage plays a small part of his love of the culture, but the way of life of indigenous people resonates with him deeply. He is ever fascinated by the way people interact with nature, objects and art and these themes are simplified and highlighted in the cultures he is drawn to. He is innovative, always looking for new ways to tell his story.

After researching his genealogy, Smith realized that he is 7% (Mickey Mantle’s number!) Native American. While his Native American ancestors lived in California, Smith’s art brings him all over the country. A map on the following pages begins to explain how he sees each geographical area, and details the animals that he associates with the area.

Smith is working on his next exhibition, which he lovingly calls “OKOKOK”. The work takes him to Oklahoma. Although he happily lives in Hickory, Oklahoma feels like a bit of a homecoming. It’s home to 39 Native American Tribal Governments AND it’s Mickey Mantle’s home-state.

While Smith has mounted many traditional shows, this will not be one of them. For this exhibition, he is doing things his way, or more specifically, the Native American way. The show must happen in Oklahoma because since his masters’ thesis, Dan Smith has incorporated the theme of radiating from a “hub.” In this case, Oklahoma is the center.

The show will center on integrating Black Elks’ 7th ritual with baseball, geometry and cosmology, throwing or recovering the ball that represents the earth or universe.

Black Elk was a famous wičháša wakháŋ (medicine man and holy man) and heyoka of the Oglala Lakota (Sioux). He famously converted to Catholicism, but before his death, he issued the directive to “recover the ball.”

We asked Smith to help us understand the themes he’s working with for this project.

“Team goals. Sacred quarters. 3 Bases and Home Plate. The seventh rite at center field. A game is played to represent the course of one’s life. The Commerce Comet. It is spent trying to get the ball which represents a universe. Wakan-Tanka. Lord of the Universe. The odds of finding your universe are protected by ignorance and other antagonists. The Hindu metaphor for ignorance is a dwarf on which Shiva dances. Balance. Moves Walking received the original rite of Throwing a Ball in a vision. It was passed on to High Hollow Horn in a dream. I went to the mound for Black Elk. “

We also asked him to help us understand the symbolism of the ball. He didn’t disappoint:

“The wool and cotton guts of a baseball are one mile long. The core pill. It has a cork center and a cowhide mantle. 108 stitches times two is a double strand helix in a yin and yang figure 8 design. Monte Alban in the Oaxaca Valley of Mesoamerica is the beginning of the Zapotec culture. The capital I shapes a ball court for play. It is a field of lost years. Imagine a nucleus that is the size of a baseball. It would have a three inch diameter and be filled with 15 miles of DNA. The DNA has to be twisted into spools called histones and folded and twisted until you get a compact shape of a chromosome.”

“I wasn’t yet born in 1951 when Willie Mays hit a pop up to center right against the Yankees. Casey warned Mickey to go for everything so he ran full blast. He was positioned in right field cleats. Joe DiMaggio had a bad heel playing center. The mental collapse of stars and planets popped into being. “

Dan Smith is an unconventional artist with a LOT to say. The OK show he is currently working on is one of twelve shows he will complete. The sprawling set of work is comprehensive and thought-provoking, just as he intended.