Category: Laying Beneath Rain on a Strange Roof 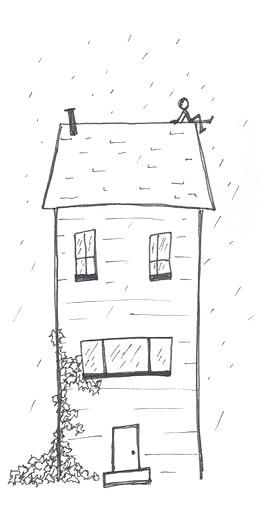 William Faulkner writes, “How often have I lain beneath rain on a strange roof, thinking of home.”

Lots of stories begin with the return to home of the prodigal, the person who left under cloud or in the belief that happiness bloomed elsewhere. These characters always return for some reason—a reckoning, an opportunity for redemption, a nostalgic calling that itches like the healing abscess of emptiness. The characters notice how much the area has changed, how many people have died, how things are not the same, and they are either jubilant or dismayed. But they’re back. Ready to fact the demon, the parent, the bully, the lost love, that thing they left behind. The characters find redemption, slay the dragon, earn more scars, but they live through the return.

This is the way of many stories.

In fact, so many that one would believe everyone leaves the place they’re reared. However, the largest majority of folks are born, raised, live and die in one geographical area.

I’m one of those. I’ve lived in Catawba County, in the foothills’ shadow, for now 55 years. I’ve slain local dragons, reckoned with existential crises, and tracked change all from a few square miles. However, I identify with Faulkner’s quote. His “strange roof” is, of course, the different geographical location from where he dreams of “home.” The words “How often” exemplifiy that he does so many, many times, as he is not asking a question but stating that even though his longitude and latitude is not “home,” home is not far from his mind and soul.

As someone who’d never ventured far from home for an extended length, I still identify with Faulkner. To me, the “strange roof” is my age, my mindset, my current situation. Even though I am educated, a dad, a granddad, a husband and friend, each one of these are “strange roofs” upon which to lie, each rainfall the cause of the nostalgia for “simpler times,” easier times. But these rainy ruminations are important in distilling the thoughts about who and what we are as humans.

I find myself still an 8-year-old boy excited about comic books, TV shows, scared of bullies and school, pining to be an adult even though I have no idea what that means. Each rainfall on each strange roof causes a meandering trip through what was and what could have been.

We’re all on our roofs, looking at the cast sky, occluded with storm clouds, the sun occasionally peeking out, but we always return home to the present, the thing we have to do to make it through the day.

In the coming issues of Foothills Magazine, I’ll invite you onto my multiplicities of roofs, my storms, which you can compare to your own and you’ll see that we homebodies who live of our lives in one area are no different than the travelers who leave and return.