Beer in the Foothills

Craft beer has become tremendously popular across the country. This boom has created an excellent opportunity for  Foothills craftsmen to develop new interests and skillsets. 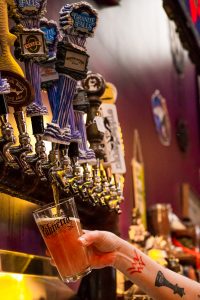 Brewing has become a Carolina pastime and here, it is a way of life. At least 18 breweries are operating across the foothills, each creating many signature beers. These craftsmen are dedicated to developing new and exciting brews, while staying loyal to the basic recipes that have satisfied people for centuries.

Walking into a brewery for the first time is exciting. The air is damp and warm and the smell of hops permeate everything. Whiffs of yeast are on the breeze, which pique your curiosity and appetite. Large vats line the walls, shiny and somehow inviting and intimidating at the same time, but craft breweries are often filled with small batches, some exotic, some hoppy, and some so dark they are only for the boldest of drinkers. It’s also impossible to miss the artistry involved at many levels. Pallets of cans and bottles with artful logos await delivery. Colors pop, and flavors are thoughtfully represented by their branding. This is no fly-by-night operation. Something special is happening here.

How to Make Beer:

Beer is made of four basic ingredients: barley, hops, water and yeast. The ratios and additional ingredients, like spices, are up to the brewer, and the process is reminiscent of science class in high school. The delicacy and freedom involved in the process accounts for the amazing variety of beers on the market. 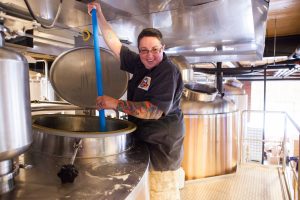 The Brewers Association defines Craft Breweries as those meet the following criteria:

Small: Annual production of beer less than 2 million barrels. Beer production is attributed to a brewer according to the rules of alternating proprietorships. Flavored malt beverages are not considered beer for purposes of this definition.

Independent: Less than 25% of the craft brewery is owned or controlled (or equivalent economic interest) by an alcoholic beverage industry member who is not themselves a craft brewer.

Traditional: A brewer who has either an all malt flagship (the beer which represents the greatest volume among that brewers brands) or has at least 50% of its volume in either all malt beers or in beers which use adjuncts to enhance rather than lighten flavor.